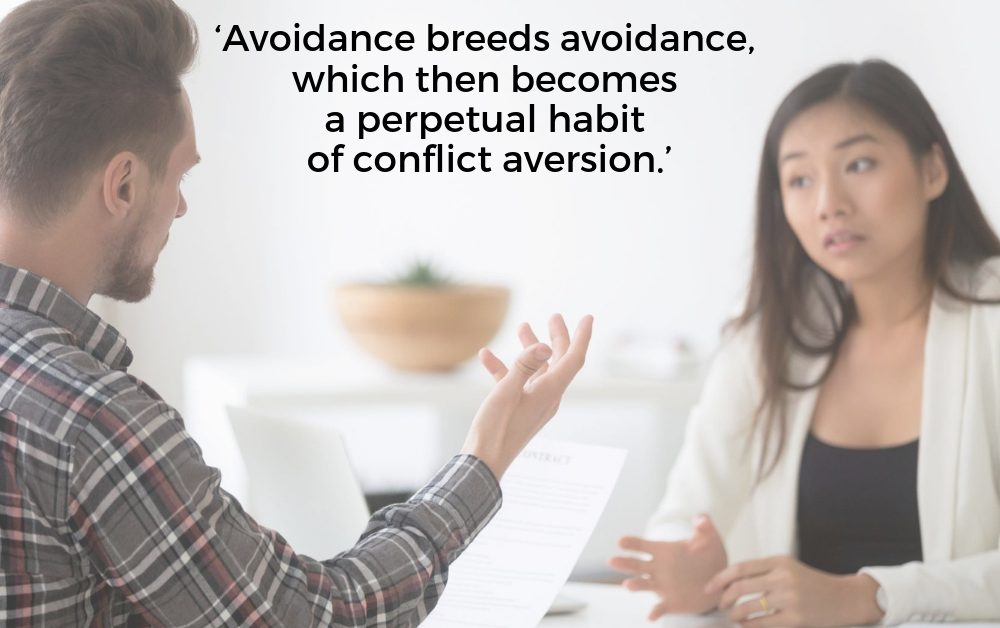 ‘Avoidance breeds avoidance, which then becomes a perpetual habit of conflict aversion.’

The fear of consequences has led many employees to fail in managing conflicts healthily and productively.

Rahmat, a manager in a Malaysian multi-national IT company, was terrified of telling the boss that the technical support team had not performed up to the mark. They had failed to diagnose and solve a system flaw for their client.

Instead, he kept sending good reports until the client complained directly to his boss, Norani. She was so dismayed that she confronted Rahmat about the matter. When asked why this was kept from her for so long, he replied: “I didn’t want to offend you and my team members.”

Of course, in the end, he did.

Another reason why people adopt the ‘smiling tiger’ approach in conflicts is the lack of competence in conflict management.

Chang, a Taiwanese human resource manager, found it tough to communicate bad news to his staff during performance appraisals. One staff member in particular had not kept the payroll record well. It was incomplete and imprecise. Chang constantly avoided raising the issue. He confessed: “I am at a loss at performance appraisal. I am inept at communicating bad news.”

The inability to communicate bad news is a real problem to many Asians. Both managers and staff are distressed by it. Most organizations do not provide training in this area, which complicates the problem.

Avoidance breeds avoidance, which then becomes a perpetual habit of conflict aversion.

Tan was a chronic conflict avoider. He knew of no other way. After he antagonized his subordinate, Jane, about her poor performance, she blew up and disputed his perception. He did not know how to respond. Tan was so taken aback by her violent reaction that he recoiled and clammed up. From then on, he shunned conflicts and would not confront his staff even if they had underperformed. His perspective was, “Better keep the peace than blow up the place!”

“Most of us have a habit of taking criticism too personally.”

We are inclined to avoid conflict also because most of us have a habit of taking criticism too personally. It has often been said, “Don’t take things personally,” when our work is being criticized. Honestly, it is tough not to take criticisms personally.

The truth is, work is so much part of our lives, and our identity is so wrapped up in our work.

Yoko, a newly hired, very bright Japanese research assistant in a pharmaceutical company, made a terrible mistake in her report. Her Caucasian manager was so distraught that he took her to task. “Your research report is so sloppy!” he said.

She submitted her resignation the next day. The manager lamented that Asians could not take criticism well, unlike his American colleagues who were more adept at handling criticism. He could not understand why Yoko could not separate her work from her person. Yoko’s way of dealing with conflict was to resign. Besides losing ‘face’, she also felt demeaned.

For many of us, it is very difficult to separate work from our self-identity because we spend much of our waking hours at work. Our self-worth is so wrapped up in our work that when people criticize what we do, we feel that our self-image has been impinged.

Take a look at this Venn diagram, which illustrates how our self- identity can be merged with our work.

Without judging whether it is right or wrong, one can understand why Yoko reacted the way she did. Yoko’s reaction is common among Asian children as well.

Thiru, a very bright pre-university (Grade 11) student from a prestigious school in India, committed suicide when she discovered that she had obtained a ‘B’ in her Physics exam. She had consistently scored ‘A’s in all her subjects. A ‘B’ marred her self-identity. Unable to face her parents, teachers, friends, and herself, she took her own life.

Allow me to make a caveat about using avoidance and giving in as appropriate conflict management styles in some situations.

Avoidance may at times and in certain situations be right and appropriate. For example, during heated exchanges and intense conflict situations, it is better to withdraw from the clash for the moment and return to the conflict when we have cooled down. To continue with the confrontation would certainly heighten the conflict.

In some situations, giving in may be right as well. For example, when our analysis of the situation is flawed and we have made a mistake, continuing the fight to preserve our honor is suicidal. It is healthier to apologize and admit the mistake.

Conflict-aversion behavior may look good in the short-term and on the surface but in the long run, they can be destructive. Avoidance and giving-in can lead to:

Having worked with many organizations and families in Asia, I have seen role models of parents and bosses who have managed conflict healthily and appropriately.