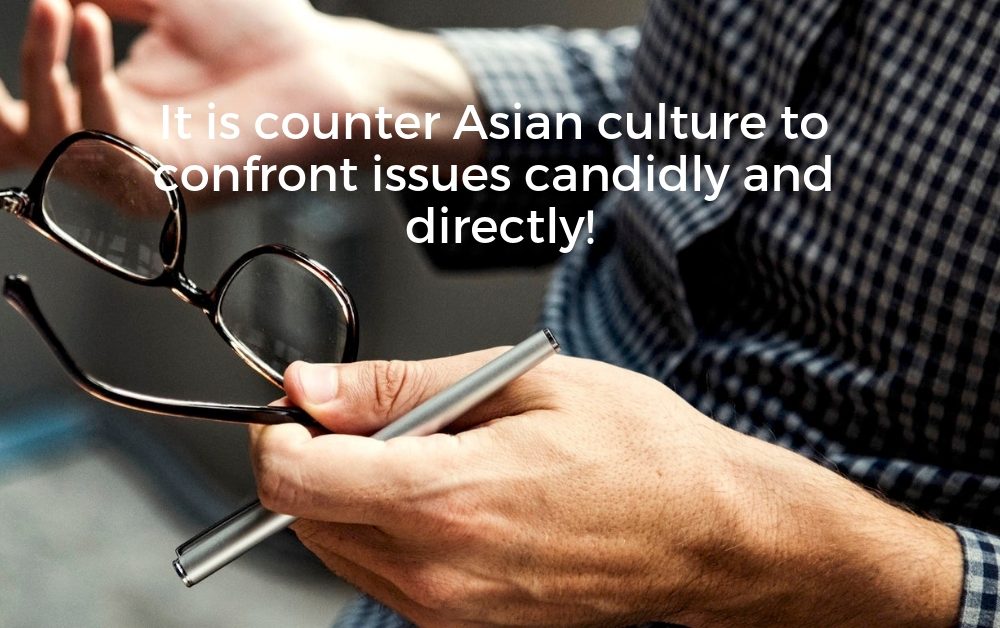 In Thailand, there are certain social etiquettes in wai (The Thai way of greeting with two hands clasped, accompanied with warm smile and bowed head indicating respect and love). A younger person must wai to an older person first. A student must wai to the teacher. An employee must smile, wai to his boss and bow lower than his boss, out of deference.

It is interesting that even though they may disagree with or have disrespect for a person, they still smile, wai, and bow.

I once sat in a department meeting between the Head of Pharmacy Department and his team of pharmacists. Before the meeting, Narin would wai, bow and smile at his boss. During the exchange, he would respond, “krap” (“yes” or “I hear you”) many times to his boss. I thought the meeting went very well as there seemed to be much agreement with boss.

But after the meeting, Narin told his peer over lunch; “The meeting was crap.” He differed entirely with his boss. When asked why he did not express his opinions during the meeting, he replied nonchalantly, “We must give him respect as the boss. I may not agree with him but I must respect him.”

“Wow!” I thought to myself. “I should be more discerning in interpreting all the wai, smiles and nods at meetings .”

In most Asian cultures, fathers are the breadwinners. Fathers bring in the dough while mothers dominate the home. Children are to toe the line unquestioningly. They are to be seen but not heard. There is no tolerance for disagreement. It is considered highly disrespectful and dishonorable if they antagonize their parents. From young, they are taught to swallow their anger and tolerate the intolerable. Sometimes this perspective is brought into the office.

Suriya, a highly energetic 30-something Indonesian who worked in his father’s business, confided, “At work, I don’t argue with my dad. He has the final say. Even if I disagree with him, I just have to go along. This is how I have been brought up. If I am upset with his decision, I just bear with it and keep it inside me.”

There is also the ‘absent father’ phenomenon. Dad is usually too preoccupied with work and leaves Mom to make all the decisions in family matters.

When I was younger, Dad would often take Mom’s side in domestic affairs. It did not matter whether she was right or wrong. At times, I used this power arrangement to my advantage. Whenever I wanted something contrary to Dad’s wishes, I referred to Mom. If Mom agreed, Dad would follow.

There is a certain patronage system in many Asian cultures. Bosses are often perceived as the benefactors while the employees see themselves as the beneficiaries. The latter then become beholden to the former.

Yang, a sales manager in China, felt indebted to his director, Wong, who treated him like a son. Wong had interviewed and recruited him. Yang became beholden to him from the first day of work. This gave rise to a patronage attitude at work, with the director is being regarded as the ‘godfather’.

Sometimes, this kind of patronage permeates throughout an organization. Hence the greater the power distance, the less powerful the employee is.

Yang’s director became a father figure to him. As such, absolute allegiance was demanded; no questions asked. During discussions, Yang sat silently and occasionally gave seemingly enthusiastic nods to Wong. It would be perceived as betrayal if Yang ever disagreed with Wong. This led to a toleration of inept performances because Wong, who expected complete loyalty in return, always protected Yang.

In order to preserve face for the other party, bosses may adopt a more indirect form of communication when confronted with issues. It is counter-Asian culture to confront a problem candidly and explicitly.

Service standards had deteriorated over the past few months in a famous Malaysian hospital. The head nurse, Miri, summoned the supervisor, Fatimah, for a meeting to discuss this issue. Instead of confronting the problems, however, pleasantries were exchanged. The situation was described and Fatimah cited the lack of manpower as the root cause. Miri pressed Fatimah further but soon sensed that she was reluctant and resistant.

Miri simply said: “Next time, do better.” As predicted, the situation did not improve. Each month, this ‘beating- around-the-bush’ continued ad nauseam.

This is a three-part series. We will continue to explore Ten Reasons Why Asians Avoid Conflict (Part Three) in the final part next week.