Warning: Cookie names must not be empty in /nfs/c12/h01/mnt/223299/domains/leadership.com.sg/html/wp-content/themes/leadership/header.php on line 4
 Leadership | The Lost and Found of the Boys in Cave:The Price and Prize of One Life

The Lost and Found Boys in ChiangRai Cave: The Price and Prize of One Life!

“This is the price and prize of one life.

No cost was too great to sacrifice.

No amount of human effort put in was too much to expand.

No price was too high to pay.

To save one life.”

“If we could cooperate globally in every aspect like we do here, almost all of our problems could be solved.”

Nick Volimar, German Diver, who volunteered in the rescue. 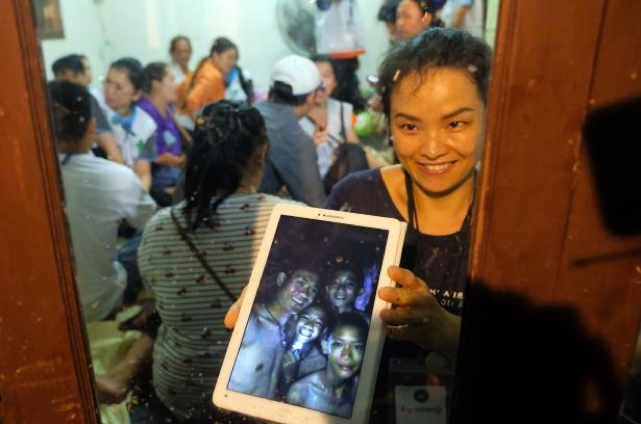 The Breaking News of the Year!

But why all the fuss over 12 lost boys? (pardon my imprudence)

For the past 3 weeks, apart from the World Cup, the biggest news was the lost and found of 12 boys, aged 11 – 16 years and their assistant coach of a local football team, The Wild Boars, in Ma Sai, the northern-most town in Thailand.

Together with the millions around the world, I found myself glued to the TV. Every TV channel I turned on, be it RTV (Russia), CGTN (China), Al Jazeera (Qatar), BBC (Britain), NHK (Japan), DW (Germany), or CNA (Singapore), it was flooded with breaking news and constant updates on the ordeal of this episode.

My Whatsapp, Line and Wechat apps were buzzing non-stop from well-meaning friends, who were sending me images, texts, prayer-requests for the rescuers and the rescuees.

Isn’t there other bad news round the world like the floods in Japan, rescue efforts seeking to save lives (already 200 had died), killings in Pakistan by Islamist radicals, wars in Syria of trapped survivors, ferry disasters off Phuket?

Why were we emotionally drawn to this story?

Allow me to share my perspectives and draw lessons from this episode.

The drama was electrifying. It was a most frightening ordeal. It has never happened in the history of humankind. 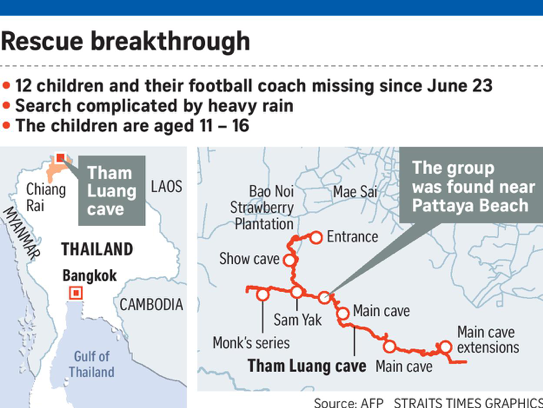 12 boys went with their coach to explore the cave and were lost. It was meant to be a leisurely, out-door activity, bringing water and snacks to bond the soccer boys. It was also to celebrate one of the boy’s birthdays.

But for the thirteen, it became a terrifying suspense of a lifetime!

They were lost for 9 days since June 23 inside the flooded Tham Luang cavein Mae Sai district, Chiang Rai, Thailand. As the monsoon rain kept pouring in, they kept moving inner and inner into the cave, until they were 4.2 km from the entrance: Trudging and treading along slippery, almost unnavigable treacherous pathways in almost complete darkness. One slip would have ended their lives, made worse by the rushing torrents of water in the cave. To top it all, none of the boys could swim!!! They were trapped!

Look at this infographics below to see how the body reacts without water and food. 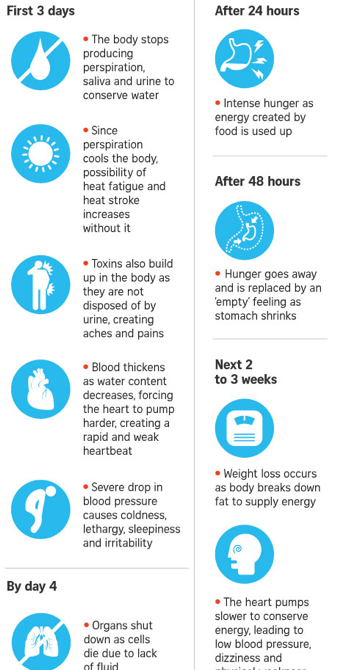 As Rohith Brijnath, one of my favourite Singapore journalists, wrote,

“Age was the essential part of the terror. My God, they were only boys, locked away in the watery insides of the mountain…As we watched the World Cup, these child footballers slept on a small island of rocks…It must have been disorientating for them and bewildering and yet we learnt, again, that we cannot appreciate the majesty of the human heart- even the young heart – till it confronts enormous adversity. We cannot tell the limits of courage till it is tested.”[1]

Very few believed they will survive. Survived, they did.

On July 2, John Volanthen and Richard Stanton, two British cave divers found the lost boys and confirmed that all 13 were still alive! “Thai Navy Seals have found all 13 with signs of life,”the governor of Chiang Rai province, Mr Narongsak Osottanakorn, told reporters. Joyous screams and boisterous were heard from relatives and rescue workers at the scene upon hearing the news.

There was pure joy all around the world.

Next, the miraculous rescue effort. How to get the boys out of the flooded cave? 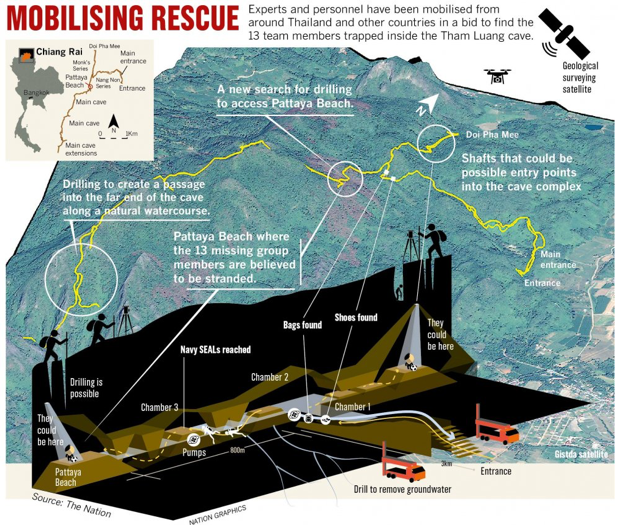 a) A Common Objective: Saving the Rescued and the Rescuers

The supra-ordinate goal was clear: Saving the Rescuees and Rescuers was paramount.

To underscore the dangerous rescue effort, on July 6, four days into the discovery of the boys, the chilling death of one retired Thai navy Seal, Saman Kunan, in an underwater passageway, shocked everyone in the rescue team. It was a rude wake-up call for all. Then, there were the three Thai Seal frogmen, who were hospitalized after their air tanks ran low.

It was a most hazardous rescue effort because of the uncharted terrains in the cave, the inclement weather and the swift currents, which could push the divers off-course for hours, sometimes tearing off their face masks.[ii]

At first, the deputy commander of the Thai Navy SEALS, Capt. Anand Surawan, announced that it might take four months to get the boys and coach out of the cave. No one could imagine that the mission impossible became possible when all the 12 boys and their coach were out in 17 days.

b) An Amalgam of Muscle & Brainpower: A Global Response

The search rapidly grew into an international operation, with specialist cave divers and other support personnel flying in to help. There were more than 10,000 people who participated, including 2,000 soldiers, 200 divers, and representatives from 10 government agencies. A multi-national operation team, involving military and specialist cave divers from Australia, Britain, Japan, Mynamar, Finland, Germany, Laos and China, and with more than 30 US military personnel.

19 pumps were used to suck water out of the cave as the monsoon rain was relentless in flooding the cave. Fortunately, all the frantic and frenetic efforts expanded to pump out the flood water began to produce results and help the rescue teams advance to the large, sandy and dry chamber called Pattaya Beach. The most waterlogged passage, which would have taken five hours, could now be done in two hours.

c) A Group of Unsung Heroes: Ordinary People Made the Sacrifice

More than 150 Thai Navy SEALS, outfitted with improvised equipment held together by duct tape, helped create the escape route. A crew of foreign and Thai expert divers courted death each time they went into the cramped flooded cave, uncertain of the crevices, sharp rocks and cliffs. The British divers, who were most experienced, navigated the most hazardous and trickiest stretches[iii].

People from all over the country volunteered in whatever they could. Dr. Richard Harris, an Australian anaesthetist and one of the most experienced cave divers, assessed the boys’ health and their coach, determining who needed to get out of the cave quickest and who could wait longer. There were the unnamed medics who not only attended to the thirteen in the cave but also the divers and the many volunteers involved in the rescue.

Then there were the farmers donated their more than a dozen high-powered pumps. Mr Lek Ladaungpoin said he was proud of his small contribution, “With the farming, we can make money again. But 13 lives are not something we can create.”[iv]

A Thai pig farmer, who lives 30 km away, joined the camp and cooked non-stop from 6 am till midnight each day. He made some 400 meals during each shift, providing much of the food himself[v].

Thousands of volunteers facilitated everything from rides up to the cave and providing meals for divers. Thai villages also set up coffee stalls and massage stations while international experts set up rescue communications and pumping systems to drain the flooded cave.

Maxtech Networks, an Israeli technology firm, has developed algorithms and software that allow radios to operate in unfriendly terrain and directly communicate with each other. 17 such radios were despatched.  A Maxtech engineer trained the rescue team on how to use these equipments. The technicality and complexity of communication in this incredibly complicated mission cannot be overstated. All these were provided complimentary by Maxtech[vi].

Of course, there is the 25-year coach, Ekkapol Chantawond, one of the several stateless members of the Wild Boars. As a football coach, he was regarded as a generous and patient teacher, willing to help even the least skilled children.

During the nine days, he sacrificed his food so that the boys could eat. From his training as a Buddhist monk, he kept the boys calm throughout the nine-day ordeal as the threat of starvation loomed in the dark.

In a letter to him from the parents, “Please take care of all the children. Don’t blame yourself.”In reply, he scrambled a note vowing to take the best care of the kids.

He made sure that he was the last person to leave[vii].

Finally, there was Saman Kunan, the retired Thai Navy SEAL member, who left his airport security job to volunteer. After the boys were found, he was placing air tanks on an underwater supply route. The irony was that he died running out of air in his own tank! Another possible cause was that he succumbed to hypothermia. His father, Wichai Kunan, a car mechanic, said, “I am very proud of him. He is a hero who did all he could to help the boys.”[viii]

Rohit Brijnath is right on when he writes about these unsung heroes, “Heroes don’t always own chiselled jaws and plucked eyebrows, hurdle tall buildings in a single bound and have names like The Rock. Heroes also come with receding hairlines, creases on their bespectacled faces and swim in the muddy waters of caves…Just everyday guys you’d never glance at twice, who quietly go deep into the earth to find, and save, life….When they return they do not pose for photos or search for the spotlight in a landscape teeming with media.”

These are the true heroes of life!

[1]Rohit Brijnath. Humanity at its unified best, with no walls or borders. July 12, 2018 p. A8. The Straits Times. SPH Publishing, Singapore.

[v]Stephan Richter & Uwe Bott. Boys in a Thai Cave: The Power of Globalism.The Globalist. Published in The Jakarta Post. July 14, 2018.