Warning: Cookie names must not be empty in /nfs/c12/h01/mnt/223299/domains/leadership.com.sg/html/wp-content/themes/leadership/header.php on line 4
 Leadership | An Extremely Complicated Operation: Mission Impossible Made Possible!

The Lost and Found Boys in ChiangRai Cave: The Price and Prize of One Life! (Part Two)

We continue to explore The Lost and Found Boys in ChiangRai Cave: The Price and Prize of One Life! in this second part, you can click here to read part 1:

A Most Prized Enterprise – The Price of One Life

Many of the deepest crevices in the cave remained unmapped. The last known survey was done in 1980. If you are lost, you are completely isolated. No GPS, no Wi-Fi, no cell phone service.

When the search began, many of the estimates between key points were inaccurate, and the location of the landmarks uncertain, clouding even the most basic assumptions. Deep within the cave, the water was so cold that the Thai divers’ teeth were chattering while they rested during 12-hour shift.

Not helped by the monsoon rain, the porous limestone cave absorbed water like sponge. Once accessible caverns flooded entirely.

Further, the oxygen level around the boys had dipped to 15 per cent (normal is 21 per cent). At 12 percent, it would be deadly. The operation kept shifting with each variable: The water, the mud, the air and even the mental and physical state of the young soccer players. On top of that, they could not swim. So, now it was a race against time[1].

Finally, the 30-member American team recommended that each child be placed in a flexible, plastic cocoon, called a Sked. These are floating stretchers, rope lines that holstered the boys and the coach over out-croppings, averaging an 8 hour journey to lead the boys out over three trips.[2] 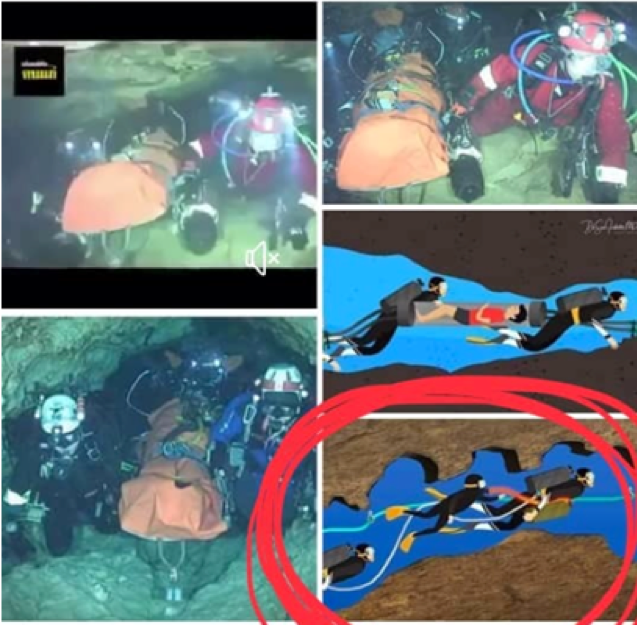 To underscore the complexity of this operation, Hannah Beech wrote, “Extracting them required long stretches of underwater in bone-chilling temperatures and keeping them submerged for around 40 minutes at a time. The boys were given anti-anxiety medication to avert panic attacks.”[3]They were sedated, so that they could just lay there and feel comfortable.

The boys had to be carried in aluminium foil to keep them warm during the 8-hour journey through the flooded cave. Once the boys completed the underwater journey, which took around two-hours, Navy SEAL teams formed relay teams to lift the Wild Boar team members down steep, slippery slopes. Most of it was treacherous. Both rescuers and rescued were at high risks.

These boys put on unfamiliar masks, breathed foreign air, and tied to a stranger, navigated through the sharp-edged terrain, slippery slopes. All kept their anxiety and fear in check.  Ivan Karadzic, a Danish professional diver, remarked in a BBC interview, “I cannot understand how cool these small kids are.” Neither can we.[4] 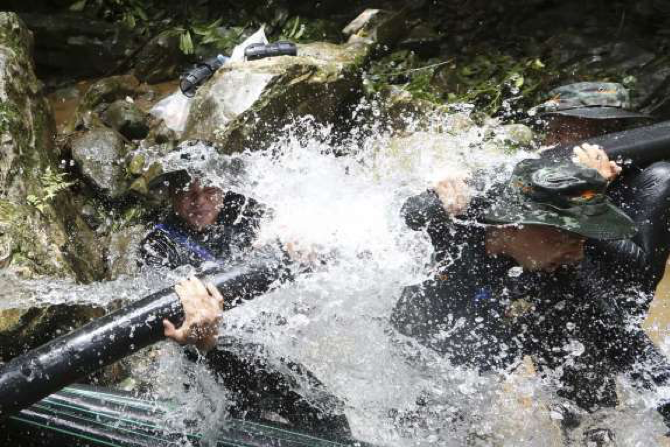 After three gruelling days, Kaew, a Thai Navy SEAL and his comrades had been hefting the 13 lives one by one through the series of slick and steep caverns into safety. He thought to himself, “The boys were safe and my friends were safe. I thought, finally the mission is a success.”Then when it seemed everything was done, a drainage pump to minimize flooding failed. He heard the yelled warning – “More water was coming fast and get out NOW”.

What had been waist-high water suddenly surge to chest level in a vicious torrent of flood water where Kaew was standing, about half a mile inside the cave’s mouth. Without any scuba gear with him, he scrambled to higher ground barely escaping the deluge of water. He barely escaped death![5]

Thankfully, all 13 are out and have been quarantined at Chiang Rai Hospital, where they are now recovering. The latest news is that they will be reunited with the family after being confined in their ward for the last week.

Truly, no effort was spared to bring the boys and the coach as well as all the rescue team members, out of the cave safely and in good health.

Why were all these experts and volunteers willing to do this, without counting the cost? Why the global response? Why was there this global frenzy?

3. A Most Prized Enterprise – The Price of One Life

John Volanthen, the British cave diver who found the lost boys, “I dive for passion and always wondered if it would have purpose. Last two weeks, was what I was prepared for my entire life.”

This is the price and prize of one life.

No cost was too great to sacrifice.

No amount of human effort put in was too much to expand.

No price was too high to pay.

To save one life.

In the words of the Good Book, one life is worth the entire whole world put together. “What does it profit a man if he gains the whole world but loses his soul?”

If you were the parent of one of the boys, you would give yourself completely to have your boy back safe and sound. You would summon all strength within yourself to save your boy. You would ask anyone who can help to rescue him. You would harness all the resources that you can muster to bring him home.

The father of the youngest boy in the group, 11-year-old “Titan”, told a Thai television channel: “I want to tell him I love him. I want to thank all Thais.”

That’s what each volunteer and diver did for the boy, the coach and the parent. Because one life is too precious.

One life lost is one life too many.

This episode has reminded me again the price of one soul.

Ask any Japanese family member who has lost a parent or a child in the recent floods in Japan.

Ask any Syrian family member who has lost their loved one in the war.

Ask any Pakistan family member, whose sibling was mercilessly murdered by radical Islamist.

One life lost is one life too many.

That’s why it was worth the price to pay for the prize of saving one boy in the Tham Luang Cave.

Ask Wichai Kunan, he would give anything to have the dead diver Saman lived again! In an interview, he sobbed and said,“I’m very proud but I am very sad too.” Then he added, as if speaking to his son, “Rest well. Daddy loves you.”[6]

As Rohit penned most solemnly, “So many kids have been saved and yet how could this be a fairy tale. Someone, after all, had lost his boy.”[7]

This is the value of one soul – worth the entire world put together!

This episode has also demonstrated to me that the global community can be a compassionate one. We are so used to see a world divided, torn by race, ethnicity, religion and socio-economic status.

Rohit Brijnath opined, “The wider world seems consumed by walls and borders, cages and fences, separation and segregation. We demonize on Twitter and are cruel without compunction. The worst of humankind plays out on our front pages and TVE screens.

Here we saw glimpses of a better planet. Here we saw calm and ingenuity, resilience and faith.”[8]

At Tham Luang Cave, we saw a different world. A global world stands united for a common cause – the saving of lives!

As Stephan Richter and Uwe Bott rightly observed, “The global community very much exists. At the same time, there is no automatic mechanism to deploy it. It largely happens on a volunteer basis. But when it happens it is a powerful and wonderful thing to see in action.”[9]

Or as German cave diver, Nick Volimar, who joined in the mission eloquently puts it, “If we could cooperate globally in every aspect like we do here, almost all of our problems could be solved.”[10]

Because the Lost and Found Boys showed me that the world can join our hearts, minds and hands together for the common good, despite the cruel inklings of our hearts.

It is my hope that this spirit will continue and every day, we remember the price and the prize of one life!