Warning: Cookie names must not be empty in /nfs/c12/h01/mnt/223299/domains/leadership.com.sg/html/wp-content/themes/leadership/header.php on line 4
 Leadership | When Avoiding Conflict is Unhealthy... - Leadership

When Avoiding Conflict is Unhealthy… 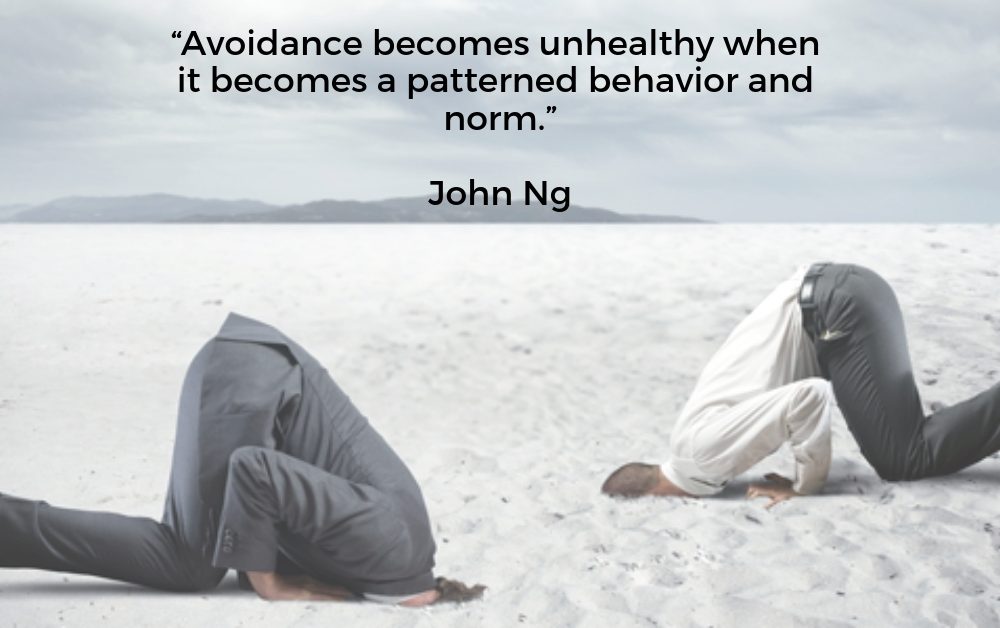 “Avoidance becomes unhealthy when it becomes a patterned behavior and norm.”

Avoidance becomes unhealthy when it becomes a patterned behavior and norm. We use it inappropriately in most conflicts. Avoidance also can have a boomerang effect on the avoider. Studies have shown that frequent avoidance of conflict tends to result in health problems and affect one’s well-being.2

Riz, a fashion designer, was a typical conflict avoider. When her director, Julia, rejected her designs, Riz pouted, sulked and ranted behind Julia’s back. She did not know how to deal with Julia or the situation. When others complained about Julia, Riz added ‘salt and pepper’ to the already unpleasant situation and reaffirmed their negative perception of Julia.

This avoid-and-criticize cycle is quite common in professional circles and in the business world.3 Let us look at how ‘smiling tigers’ express themselves without showing their true colors.

Have you ever finished a meeting and felt elated that as a leader, you communicated the vision and goals for the year clearly? The sales and marketing staff seemed to be smiling in agreement. There was very little discussion at the meeting and many heads were nodding.

Then to your horror, after three months, the sales figures don’t match up with the promise. Staff have not performed. Instead, you hear a lot of complaints about unrealistic targets, lack of sales incentives and other similar disgruntlements from the grapevine. You see unmotivated and demoralized staff and wonder what happened.

The ‘back mouthing’ rears its ugly head. It happens after so-called ‘successful’ meetings. Sales staff would gather around the lunch table and their true feelings would begin to emerge. Soon, the ‘complainant choir’ is formed!

Miguel, the accounts manager in a large advertising firm in the Philippines, appeared to be supportive when his boss, Pasquel, presented a new target for his department for the coming year.

Miguel had many questions and disagreed with the strategy. However, being an introvert, he needed time to digest the information and formulate his queries. Moreover, Miguel’s relationship with Pasquel was not very good and he felt that Pasquel would not listen to him. So, Miguel reluctantly agreed to the new target.

After the meeting Miguel gathered his team for lunch and complained incessantly about the unrealistic goals set by Pasquel. He dismissed them as “crazy” and proceeded to bad mouth his boss. Miguel was unaware that he was launching a ‘Ninja attack’.

Another way the ‘smiling tiger’ operates and rears its ugly head is to adopt a ‘go slow’ approach. Project timelines are agreed upon but later stretched. When confronted, excuses are made for not completing on time. In reality, the staff never agreed to the idea in the first place. This scenario often occurs in parent-child relationships as well.

Tranh, a teenager, was very unhappy with his mother Min’s insistence on him taking science classes as he was interested in the humanities. Min and Tranh had conflict after conflict as Tranh kept putting off completing his homework. When he failed most of his science classes, it drove his mother up the wall. Tranh’s studies became a constant source of conflict between him and Min.

The ‘go slow’ technique leads to ‘Ninja attacks’ and ‘fighting shadows’ situations. Mistakes are covered up and hidden. The staff refuses to confront the real problem. There are many skeletons in the closet which nobody wants to reveal. Bosses may exacerbate the problem because they want to look good. Sometimes, they also adopt the non-confrontational, beat-around-the-bush communication style. Hence, the whole organization ends up fighting shadows.

Fouad, a Saudi sales and marketing director of a power and oil company had been suspecting that sales records were altered. He refused to acknowledge it, for fear of losing face or job, or due to his non-confrontational style. Week after week and month after month, he just let it go by. Finally, the auditors came and exposed the whole scam: sales figures were being manipulated. It turned out that the managers had readjusted the profit figures for the last two years.

Fouad’s ostrich approach towards conflict management did not help the situation. Although Fouad was innocent, he was removed because he tolerated the mistakes and did not have the courage to confront the situation. The organization almost went into bankruptcy because of this issue.

There are individuals who suppress their feelings and anger for a long time. It is only a matter of time before their emotions get the better of them and they explode.

Han, a Korean logistics manager, was committed to a high performance standard. Recently, he had been very frustrated with the way things were going in his department. They were not going anywhere. Deadlines were not kept. Performance was way off the mark. One afternoon, during a meeting with his staff, he tried once again to get his staff to explain why the warehouse records were not in order. “I don’t know,” came the reply. Han went through the roof. He shocked his team by shouting, “What the hell is going on? *)&^^%% you!”

For some people, continual avoidance of conflict is merely a suppression of their emotions. One day, the emotional volcano is bound to erupt. People around them will get scarred badly as ‘ashes’ and ‘lava’ fly all over the place, causing severe burns and untold hurt.

A Mutiny on the Rise

When negative emotions of frustration and anger are not managed properly but are repressed, they will lead to bitterness and revenge. Sometimes, a mutiny can result.

Wang, a Chinese production manager in a shirt factory in China, was furious about the lack of support from his CEO, Luo, who adopted a very command-and-control leadership style. Luo had the final say in everything and loved to micro-manage. Worse, when Wang approached Luo to discuss certain issues, Luo brushed Wang off and dismissed the discussion. The accumulation of such incidents caused Wang to grow angry and bitter.

After yet another brusque discussion, Wang began sabotaging Luo. He gave Luo false information about production matters, feeding him the wrong numbers and camouflaging it very well. During the board meeting, Luo was summarily embarrassed and sacked.

Wang subsequently submitted his resignation as well, but he had the last laugh. The entire production team joined Wang in leaving the company. It was a mutiny in revolt.

‘Smiling tigers’ who do not show their true colors pose very serious problems and challenges to their leaders, spouses and parents. These ‘smiling’ behaviors are very subversive and destructive. Their smiles are often facets of ‘face’ saving, ‘face’ giving, and ke qi (politeness).

Being a ‘smiling tiger’ may be a culturally appropriate non-verbal behavior but it can be implosive if issues are not resolved and explosive if emotions not managed.