Warning: Cookie names must not be empty in /nfs/c12/h01/mnt/223299/domains/leadership.com.sg/html/wp-content/themes/leadership/header.php on line 4
 Leadership | Why Respect is Important in Asian Conflict Management - Leadership

Why Respect is Important in Asian Conflict Management 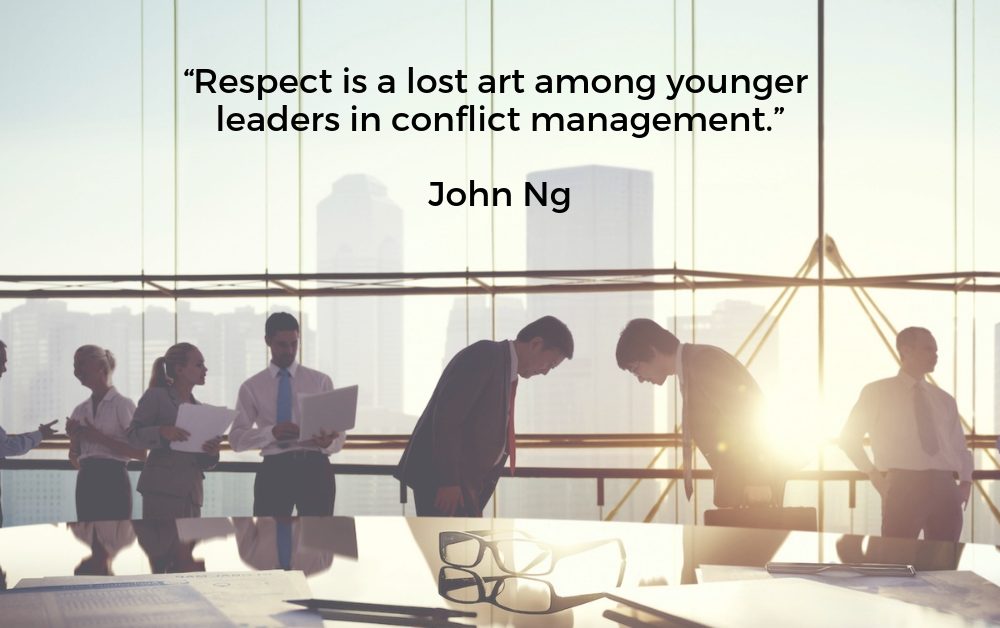 “Respect is a lost art among younger leaders in conflict management.”

One of my most ardent readers of Dr. John’s Leads, Stephen Yong, feels that my articles on how Asians tend to manage conflict is often slanted negatively. He challenges me to give a more positive spin on some Asian aspects of conflict management.

After reflection, I decided to post the article on ‘Why avoidance can be healthy?’ In this new article, I want to talk about respect, which is a great Asian virtue but a lost art.

Respect, especially for parents, the elderly and those who are more senior than them, is one of the most valued Asian traditions. But this  seems to be lost among young people in Asia.  In Hokkien, younger people tend to be, ‘Bo Tua, Bo Sui’ (没大没小)

This is also true for younger leaders learning how to manage their seniors.

In conflict situations, some younger people love to argue and show little respect for the seniors, even their parents. Their sense of rightness and feelings of hubris make them disrespectful of others.

It is also true that sometimes, the seniors abuse their authority, refuse to listen to their arguments, insist that they are right because of their positions/age and demand the submission of the younger ones. This often exacerbates the conflict by alienating them, creating impasses, and if left unresolved, dividing the team or the family.

In spite of that, I want to argue that respect is still an important Asian value that we must uphold, model and practice.

“A child who is allowed to be disrespectful to his parents

will not have true respect for anyone.”

Young people must not forget the sacrifices the seniors have made. In their years of service to the organizations, they have paved the way for us by their loyal service. We must not forget that they were brought up in a very different cultural background. Often, they have good intentions but may express them differently. They are misunderstood.

I remembered when Alison and I got married thirty-six years ago. We wanted a simple wedding ceremony. We didn’t want to be too lavish in our wedding by inviting people we did not know, waiting for guests who had no respect for time and wasting money we did not have. So, I insisted that our wedding dinner would be a small affair without all the fanfare.

My parents, especially my mother, were very upset. Being their youngest son, I was doted upon by them and the siblings. They had relatives and friends to whom they wanted to ‘show off’. It was our family’s last wedding bash. Neighbors had been waiting for it. But I showed them no respect by insisting on a small wedding, without inviting any of their guests and friends. My parents lost face for not inviting their friends and relatives for such an auspicious occasion. Subsequently, for many years, they constantly reminded Alison and me that this was one of her biggest disappointments in their lives.

I showed no respect for who they were, their traditions, and their sense of pride.

Years later, after having become wiser, I regretted this decision.

A great relationship is about two things;

first, find out the similarities,

During conflict with our seniors, showing respect means learning to focus on agreements and common interests more compared to  generational differences.

Unfortunately, younger people assume that older folks should think and behave like them. Our mental CPU is usually on hyper-drive – we process information much faster, we can have access to any information almost instantly, we move faster physically and we are more savvy in the digital world.

On the other hand, the seniors are brought up in a very different generation (in a very hierarchical and top-down culture, where their words were law). Their mental CPU is still on ‘Version One’, their capacity to remember is considerably slower, their knowledge is often outdated (and they are not aware of it), they move much slower and they are more digitally challenged.

Hence, we tend to be less understanding and more impatient with them, which is perceived as being disrespectful. We must find more areas of agreement, affirm them more, and appreciate their wisdom and experience. This will help to bridge the generational gap. 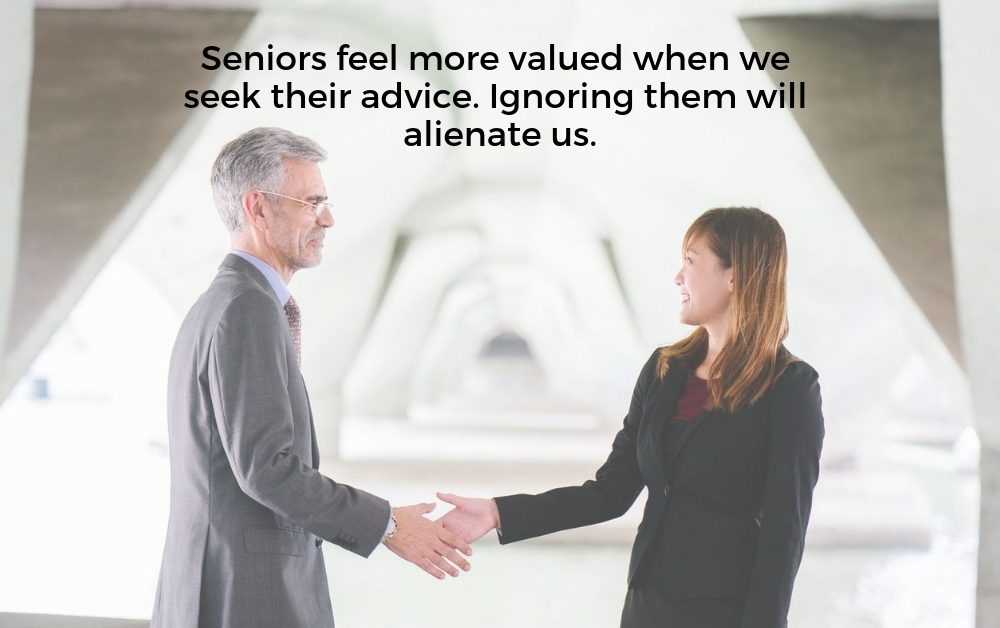 Our parents often give us unsolicited advice, albeit misguided. We react angrily, react negatively and shut them down. We seldom listen to them first. We often do not appreciate them and forget that their advice is often motivated by love and concern. We dismiss their good intentions, find fault with them and love to argue and correct them incessantly.

Since turning 60 four years ago and now that I am a parent of three grown kids, I realize how the seniors feel. I am more sympathetic to them. Sometime, I often feel not respected by the way they treat me. They are smarter and know more than me but the way they communicate with me leaves me feeling disrespected.

It’s not what they say but how they say it which ‘eats’ me up. They may have better arguments but their nonverbals (harsh tone, frustrated eyebrows, negative facial expressions, and aggressive gestures) make me feel disrespected! My self-talk is something like this, “They think they know better. I have eaten more salt than they have eaten rice! How dare they treat me like this after all that I have done! They become so disrespectful!”

This loss of respect can be very devastating to my ego and self-worth. I feel unwanted and worthless.

It might mean nothing to you but it could mean everything to them.

Respect means treating the seniors, especially our parents, with more gentleness and sensitivity. Sadly, this is a lost art. Younger people must learn to give the elders and seniors face by not pointing out their mistakes directly or embarrassing them in public. We need to learn to show respect by seeking advice from them because their age and seniority comes with wisdom and experience.

Finally, respect means loving them, honoring them and not forgetting their contributions.  We must make the elders and seniors feel important. When we have such emotionally-engaged relationships, conflict with them can be easier to manage.

Some Do’s and Don’ts