How Toxic Are Your Employees? 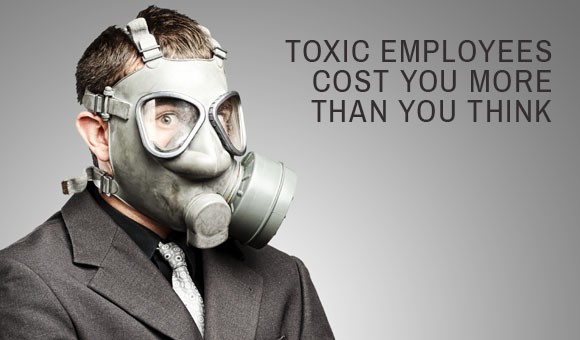 After my last Dr. John’s Leads on toxic bosses and assessment instruments, some bosses told me that I should author another piece about toxic employees.  We all have some forms of toxic behaviour, and it is important that we have good self-awareness to address these toxins in our lives.

Toxic bosses and employees in turn create toxic cultures in the organization.

The economic damage to the company from such employees has been estimated to be worth billions of dollars and if unchecked, can even lead to the organization’s self-destruction. In the US alone, active disengaged workers cost companies US$450 billion to US$550 billion per year[1].

The psychological damage on individuals and their teams includes irritability, poor judgment, anxiety, anger and even suicides. Organizational damage includes loss of morale, poor teamwork, intense and unresolved conflicts, safety violations, increased absenteeism, and even ‘presenteeism’ (a condition of being physically present but mentally absent)!

Over the years, I have compiled various categories of toxic employees. See if any of your employees fit in any of these categories.

These employees are on one extreme of the toxic spectrum and actively create havoc in the organization. They are more vocal and find fault with their bosses. Their tactics include speaking vicariously for the staff and often saying: “Some employees have complained to me…(but it’s really their opinions).” They present themselves as champions of the ‘underdogs’ but actually have their own personal agendas and axes to grind.

These employees are at the other extreme of the toxic spectrum. They literally cruise along and do the minimum work required. Their greatest reward is the paycheck at the end of the day because they can’t find work elsewhere and refuse to budge because the ‘grass is not greener on the other side’.

They are content to do work at their own pace, and work only when reminded or reprimanded. Their favorite tactic: Go-Slow. Their favorite word: ‘Tomorrow’ (which actually means sometime in the near future’).

These employees are usually quiet at meetings but afterwards, they gossip, spread rumors, send and bcc nasty e-mails/WhatsApp/WeChat to relevant parties. They speak ill of the company and its policies behind their bosses’ backs, but seldom speak about their grievances.

Their uncooperative non-verbal and non-involved behaviors betray them but when asked, they say nothing. They seldom defend the company’s policies or speak for the company but rather undermine it by complaining, when asked, “I don’t understand why management does that too.” They verbally agree but non-verbally disagree.

These are the close cousins of and the more toxic version of the passive-aggressives. Their main tactic is to throw spanners into the works of any grand vision or plan. They make sarcastic and snide remarks to irritate their teams and bosses. They disguise their attacks well by undermining their bosses’ authority. They cast doubts on projects and insidiously destroy team morale. They seldom come out into the open but launch ‘ninja-attacks’ hideously.

These employees had bad experiences with one or two members of the management and their policies. They harbor ill feelings towards them and have unresolved conflicts with them. They have also grown cold and bitter, and are silent at meetings.

They refuse to or reluctantly co-operate with the ‘perpetrators’. They can be nice to others but nasty to their ‘perpetrators’ and refuse any attempts at reconciliation. They view themselves as ‘victims’ of perceived unfair policies who have been betrayed and/or unfairly attacked by their perpetrators. But their toxins seep out at meetings and interactions.

These are the company superstars but are usually arrogant and aggressive. They are seldom liked and are often disdained by the co-workers but are the bosses’ darlings because they produce results at the expense of teamwork and collaboration. They ignore or break rules to achieve their goals. They are smart but lack EQ. As the company’s performance depends largely on them, they can literally get away with ‘murder’. The bosses often excuse their arrogant behavior because they need them to show or shoal up their own performances.

These are mediocre employees with glaring weaknesses, which they do not know but others know too well. Their performance is average and inconsistent and they have little self-awareness. Sometimes, they are unaware that they have any weaknesses, and don’t see the need to improve in any area.

They have a sense of self-importance and tend to rate themselves highly and ignore their weaknesses during performance appraisals.

When confronted, they justify and rationalize their behavior and performance. They have the tendency to blame or accuse other co-workers for being not helpful or cooperative, which lead to their under-performing.

Let me know if any of these profiles fit those of your toxic employees. If you have other types, please feel free to write me.

If your actions create a legacy that inspires others to dream more, learn more, do more and become more, then, you are an excellent leader.