Managing the Human Side of Organizational Change

We begin with three pieces of common knowledge: the world is changing, the pace of change is accelerating, and individuals and businesses must adapt. Radical change can threaten our assumptions about the world and ourselves. Change challenges our identities. In response to this challenge, we need to rethink and sharpen our definitions of who we are.

Schein (1971) believes resistance to change to be one of the most ubiquitous of organization phenomena. A number of authors have defined resistance. For example, Ansoff (1998) defines resistance as a multifaceted phenomenon, which introduces unanticipated delays, costs and instabilities into the process of a strategic change, whilst Zaltman and Duncan (1977) define resistance as any conduct that serves to maintain the status quo in the face of pressure to alter the status quo.

Dent and Goldberg (1999) challenge the concept of “resistance to change” by calling it a received truth. They assert that people do not resist change. People may resist the loss of status, loss of pay, or loss of comfort, but these are not the same as resisting change. Beckhard and Pritchard (1992) maintain that “there is a universal condition that wherever there is a change effort, there will be resistance” (p 74). However, the authors suggest that the resistance may be caused by the need for people to learn new things or to destroy old and familiar ones, or it may result from the individual dynamics of a fear of failing, or of looking silly or incompetent in learning new skills.

William Bridges (1991), author of “Managing Transitions”, asserts that change is different from transition. Change is situational: the new boss, the new restructured organization, the new work procedures. Transition is psychological. It is the gradual re-orientation process that people go through as they adapt to change. Change is external, transition is internal. Bridges warns that “unless transition occurs, change will not work” (p. 4).

The Centre for Creative Leadership made this pointed observation: Change is the flip of the switch. Change is the decision or experience or introduction of that which is new or different. Transition is the process of adapting to the change. Most of us don’t factor in the challenge of transition. A change that takes 12 weeks to plan and implement typically takes 100 to 120 weeks to integrate. Poorly planned, it may take 200 weeks. Yet, managers and consultants rarely allow more than 26 weeks! Without providing time and attention to transition, organizations fail to see desired benefits of change efforts.

What are transitions? Transitions are more than just gradual changes. A transition is the psychological process by which people affected by a change reorient themselves from what-has-been to what-is going-to-be. According to Bridges (1991), there are three phases people undergo in a transition.

The first phase, the Ending phase, is a letting go of an old identity, an old reality or an old strategy. Next comes the in-between phase known as the Neutral Zone, which is akin to crossing the wilderness between the old way and the new. The final phase, the New Beginning, is making a new beginning and functioning effectively in a new way. 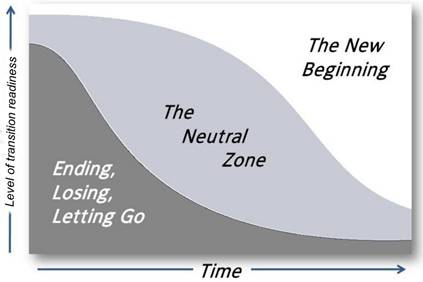 Therefore, it is not change that people resist. People resist the transition they undergo. Every transition begins with an ending, and that to some people is very difficult to handle. It implies a loss for them – loss of their world and identity.

Successful change need two key success factors – a good change management plan and a good transition management plan. Transition management addresses the human side of change. It foresees who is going to have to let go of what and help them disengage from the old ways. It addresses the dangers and opportunities posed during the in-between phase and provide the necessary support. It also sets aside resources to help people make a new beginning. To do these things is to manage the transition. Not to do them is to launch a change that may well prove to be unmanageable.

A few years ago, we could get by through poorly managed organizational changes. Today the costs of unmanaged transition are costly:

How to Manage Change Better

It is useful to remember the next time you implement a change that people do not resist the change. They resist the transition they undergo. What is the difference then between a change and a transition? They can be summed up below:

Bridges (1986) noted that the psychological process is similar in organizations when change hits them. It could be a merger, a downsizing exercise or another reorganization. People may know about the change, but they will be grappling within themselves to make sense of it. Therefore the role of the change leader will be to address the transitions that people go through to ensure a smoother change taking place.

First, every transition starts with an ending.  It is useful to do the following during the ending phase:

After the ending has been made, a beginning is possible—but it cannot occur immediately. There is an in-between state between the old ways and the new. Keep in mind the following during this phase:

The final phase of the transition is the beginning. This is when people really buy in, get on board, and feel at home with the new. This is when:

Think back to some organizational change that did not work as planned. Did you address the issues in the three phases, outlined above? What you needed was a transition management plan—a way to manage the endings, the in-between phase, and the new beginnings.

Managing a change is simply not enough. Managing the transition is necessary too. Transition management is a key executive skill for change leaders.

Dr Lim Peng Soon is an Associate Principal Consultant with Meta. He is also the President of Learning & Performance Systems, a consultancy with expertise in organizational change and transition. He works in partnership with organizations in their change and transition management, leadership development and team development initiatives. Dr Lim holds a doctoral degree in education and human development awarded by The George Washington University (USA), and a Masters degree in Human Resource Development from the same university. Dr Lim is certified to design and conduct the “Leading Organizational Transition” workshop, using proprietary materials from William Bridges & Associates (www.wmbridges.com).

People often ask me about time management. But in return, I tell them it’s the wrong way to think about achieving balance. After all, there are only 24 hours in a day. If you stop thinking about managing time, and focus on managing energy, the field becomes open because while time is finite, energy is infinite.