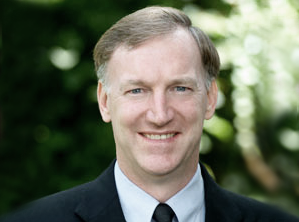 This is an exclusive interview with Rev Dr Scott Cormode, the Hugh De Pree Professor of Leadership Development at Fuller Theological Seminary on becoming a change leader.

As a professor in leadership development and as a leader in various organizations, how do you personally define leadership?

I define leadership as change over time, its enabling change over time; but that’s not a good enough definition. The easiest way to get change to happen is structural leadership, it is when I have authority and I can command you. We’d like to think about that as the way that leadership usually happens but it’s pretty rare.

The other kind of leadership is relational leadership, because we are friends you will do something, or because I’m kind to you.

But the most powerful kind of leadership is the kind where you make meaning, where you change somebody’s mind, where you persuade them, where you get at the values that are inside of somebody, help those values to come out and when they go off they go off with vigor and excitement to change the world.

How do you see the role of a leader has evolved, in the past 5 years and maybe projecting in the next 5 years?

Once upon a time, leaders decided things for other people. And then leadership was about rounding people, almost like a sheep dog circling the herd and forcing them to go where they didn’t want to go. That wouldn’t work in our world anymore.

Leadership now comes from the inside out and leadership is about helping people understand things from a new perspective. And the way that I think about it, especially for Christian leadership, is that I take my story and your story, and we weave it together with a biblical story to create a shared story of future hope. And if we can participate together in a shared story of future leadership, we can change the world.

What is the critical challenge for leaders now, in this changing world?

The biggest challenge for leader is to be agile. Once upon a time, what you would do, is you would learn something and you would be like a camel. And we would pump you with enough knowledge and send you out into the world and you would know what’s over the next horizon and you wouldn’t have to learn anything new.

But how many people of my age went to school and were told about the internet? The internet didn’t exist! And yet it transformed everything! What’s going to happen in 10 years from now, 20 years from now, that’s going to change everything again? So the most important skill for a leader is agility. But agility requires preparation, just like a boxer or an athlete would learn a lot of different steps or footwork, they don’t know what kind of footwork they’re going to need, or like a soccer player, they don’t know what footwork they’re gonna need but once they’ve learned it, it allows them to be agile. So this next generation is going to have to do an awful lot of learning, in order to be prepared, so in the critical moment, they can be agile.

What are some key qualities of a leader, especially let’s say, your audience now are emerging leaders, the very young ones in their first stage? What are those qualities they should develop in order to face such a continually changing environment?

The hardest quality for emerging leaders to develop is a 3-part quality, it is the ability to change yourself and it takes 3 things.

It takes self-awareness, that is the ability to see in the moment how are my emotions are affecting me, how am I being read in the room,  all of the different kinds of things that I am able to map together into the present. But then there’s also self-reflection, which is the ability to look into the past, and see how I acted, think through it, and decide, you know, I’d like to be different in future.

And then the third piece of it is self-discipline, to be able to look into the future and say the next time I’m going to encounter the situation, I’m going to be different. And not just say it, but actually do it.

So self-awareness is the present, self-reflection is the past and self-discipline is the future.

Effective leaders help others to understand the necessity of change and to accept a common vision of the desired outcome.