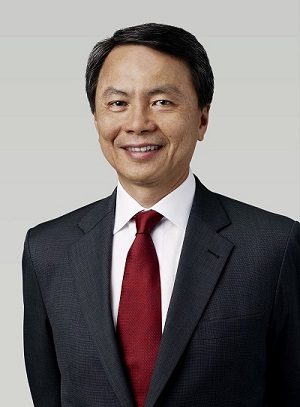 Hsieh Fu Hua is no stranger to dealing with crisis. The 63-year-old Singaporean has weathered several maelstroms in his corporate career, from the Pan-Electric crisis in 1985 to the Asian Financial Crisis in the late 1990s and more recently, the Global Financial Crisis.

“Leaders should lead from the front during tumultuous times, and resist the urge to play the blame game.”

As the Singapore Exchange (SGX) chief executive from March 2003 to November 2009, Mr. Hsieh steadily helmed the bourse through the 2008 Global Financial Crisis — an event thought by many experts as the worst worldwide slump since the Great Depression in the 1930s.

“Leaders should lead from the front during tumultuous times, and resist the urge to play the blame game”, he says.

Mr. Hsieh has had extensive experience in the financial services sector, ranging from stockbroking, investment banking and fund management.

He began his career at British investment bank Morgan Grenfell Asia in 1974, ris-ing to the rank of managing director by 1985. In 1993, Mr. Hsieh co-founded Prime Partners, a corporate advisory firm based in Singapore.

He has also served on the boards of major government investment agencies Temasek Holdings (2010–2012) and the Government of Singapore Investment Corporation (2003–2010).

One of his more recent appointments is non-executive chairman of United Overseas Bank, a position he took up in April 2013.

Outside of the corporate world, Mr. Hsieh is also active in the charity arena.

He was appointed president of the National Council of Social Service (NCSS), the umbrella body for about 400 member voluntary welfare organizations in Singapore, since August 2012. He also founded BinjaiTree, a privately-run charity that gives out grants to various organizations.

To Mr. Hsieh, leadership means being able to live up to the highest professional and moral standards. Whatever position he takes, he is always true to himself.

We catch up with Fu Hua over tea in his office.

Who or what influenced you most in your leadership development? And why?

A play, which I read at school called A Man for All Seasons1, captured my imagination and resonated deeply with me. The protagonist Sir Thomas More was known to be an accomplished man and chancellor.

As a leader, you have to be clear what that constant is.

Amid all the complexity in his practice of state craft, he held a ‘constant’. As a leader, you have to be clear what that constant is. There is also a definite part of you, core values which you cannot compromise. There will be many times and situations that you have to be true to yourself and to those ‘very core’ values. That was what I found most significant about the play and its lead character.

In your leadership, what are some core values which you will never compromise on?

Integrity and listening to the inner voice that tells you to do what is the right.

But it’s never easy. Even defining integrity is not easy.

As a leader, of a large organization or one fellow, you make hard and significant decisions at different stages.

To me, as a leader, it is not about enforcing rules or holding to unyielding doctrines. There has to be a balance of listening, deep reflection and accommodation. And yet at which point do you say “it’s inviolable”? Where you say “no matter what it costs, I will not agree”? Even when the price is extremely high, you choose not to consent. Are you prepared to give up all? That, to me, is the most challenging part. There is a worldly saying “Every man has his price”. If you subscribe to that, then it is a lost cause.

Have you ever been in a situation where you were prepared to give up everything and not compromise on your core values?

As a leader, we have a duty to uphold the rules of the game and the rules call for fairness and transparency. These rules must apply to you, even if it is hugely embarrassing. That is the right thing to do.

Earlier on in my career, I made an erroneous investment decision which I could have hidden. Nobody would have known. I didn’t know what the price would be. But could I have lived with it?

I owned up to it and paid my dues. Till today, I am still reminded of it.

In short, you must live up to the highest standards expected of you as a leader.

What is one memorable life-changing experience that has impacted and shaped the way you lead?

In leadership, there are times when you have to confront people far more important, far more powerful than you. “Confront” meaning you disagree on the point of fundamental principle because of what you know and understand. To choose not to voice your disagreement is a cop-out. It can make one feel very uncomfortable and be very unpopular. There are definitely such times that one should make a stand.

You have to say this is wrong when it is wrong. As leaders or board direc-tors, we should not allow nor encourage willful blindness. Don’t just look the other way to stay popular.

My conscience must work.

What advice do you have for business and investment leaders dealing with turbulent times?

One key lesson is not to play the ‘blame’ game during tumultuous times.

In a crisis, leaders should take upon the responsibility of leading at the front. During such tough times, a leader should confront the problems head-on rather than confronting his/her people. Be more proactive and outward facing, at the same time, maintain your sense of perspective. When your people know that you are with them and demonstrate control, the team becomes stronger to deal with the issues at hand. Without a doubt, a leader takes on the most pressure and makes the final call.

How do you prepare for crisis management?

Besides having a robust crisis management plan and going through various simulation exercises, be prepared to be up front when those moments arrive.

In any crisis situation, no one should play the ‘blame’ game. The organization should not unnecessarily sacrifice its leader or staff. When the leader takes up such responsibility, the Board should stand with and behind the leader and see through the crisis together.

What do you consider to be your greatest weakness?

I would say managing one’s ego. We are used to having our voice heard, and we end up not listening.

It is important for leaders to remember that it is about projecting what the organization does, not about the personal agenda.

Any word of advice to current and future leaders?

I believe a leader is not a boss, who bosses people around and has an entitlement mentality. It is a huge responsibility. The leader has to lead by example. It is also important to have the right mentors: people in one’s life are the ones who throw light on how you should think of yourself and matters around you.

A leader is someone who is able to do the right thing despite the challenges, pressure and circumstances pressing down on you.

This is an excerpt from Dr John Ng’s latest book, ‘Heart to Heart with Asian Leaders – Exclusive Interviews on Crisis, Comebacks & Character’

Click Here To Find Out More About This Book.

1 The play portrays Sir Thomas More, the 16th-century Chancellor of England, who refused to affirm the Act of Supremacy making King Henry VIII the supreme head of the Church of England. Sir More is a principled man with a conscience, who chooses to remain true to himself and his beliefs while accommodating the complicated circumstances throughout. More represents “a man for all seasons,” whose conviction remains constant even in the face of external pressures.

Mr Hsieh Fu Hua is currently the non-executive Chairman of United Overseas Bank (UOB), President of the National Council of Social Service (NCSS). Prior to this, Mr Hsieh was the chief executive of the Singapore Exchange(SGX) from March 2003 to November 2009. He has also served on the boards of major government investment agencies, Temasek Holdings (2010-2012) and Government of Singapore Investment Corporation (2003-2010).

If your actions create a legacy that inspires others to dream more, learn more, do more and become more, then, you are an excellent leader.